While spending time in Seattle with my sister and her girlfriend for a few days, I began thinking about the winding paths we wend – literally and metaphorically. This notion came to me along a walk that led us from their apartment to Lake Washington and back. We wandered down a main thoroughfare through their neighborhood and eventually began following more random, smaller paths between beautiful homes. As we descended further and further downhill, it became apparent that there was no rhyme and reason to Ellie’s method when she turned around and stated “I don’t actually know where we are going, by the way”. At one point, my sister asked if there was a better way to go, to which Ellie responded “there is no wrong way”. A simple yet eloquent, profound statement.

Whether through an old city neighborhood or through our own lives, the choices we make become ever blurred and grey. Ellie commented that she had been searching for a specific path she had discovered years ago when she lived in this neighborhood. Each time she set out on a walk, she hoped to happen upon it. The metaphors from this experience were fairly bursting at the seam. There seem to be certain points in our lives when we have clear decisions to make, a fork in the road, if you will – two or three pronged, perhaps. Yet more frequently, it seems that opportunities present themselves at unexpected moments, and we have a choice of whether or not to pursue them into often unknown, undefined terrain.

These pathways can be messy and without structure. Certainly, our choice of paths to follow ranged from pavement to trails to unfinished wooden platform stairs and beyond. Yet we managed to find our way out of the forest and to a bench overlooking the peaceful, flat calm waters of Lake Washington, where we sat and pondered various topics, took photographs, listened to a brown creeper singing its song of endearment for the shrubbery – “trees, beautiful trees” – over and again, and watched the Ring-billed gulls performing slow and deliberate yoga stretches atop a floating raft just offshore. 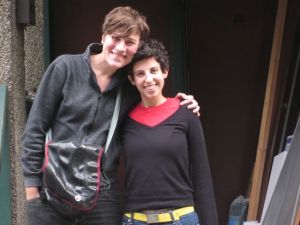