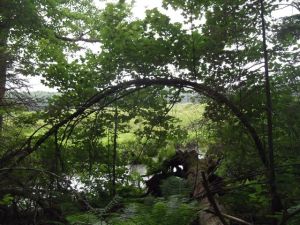 This afternoon, I headed to a park within the limits of the gritty city. I spent most of the morning working in my apartment, and it was time to get outside. Just moments after stepping out of my car, I glimpsed something seemingly fantastical yet on the edge of familiarity float across the road and land on the trunk of a tree.

I haven’t seen a PIWO since I left Washington, and I was so overcome with excitement that I went barreling down the road after it—not particularly graceful or demure etiquette, though effectively birder-like. Of course, I am fairly certain the site of a human, however small, lumping along, backpack slung haphazardly over one shoulder, binoculars over the other, camera and ipod dangling precariously from one hand, cell phone and car keys in the other, would be enough to send any bird flying back into the forest. It certainly worked on this one.

Just hearing the beginnings of its mocking laughter call and watching its beautiful—and very graceful—undulating flight was more than I could have hoped for on a good birding day, and this hike had only just begun. 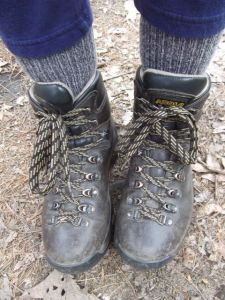 No offense to my boots, but it is hard to compete with a visit from a long, lost avian friend.

My heart full, I headed down the road, senses alert, happy. I followed a path that brought me alongside a marshy swampland. Eastern Wood Pewee “peee-uh-wheeee,” a Green Heron flying low over the marsh, Common Yellowthroat calling out “witchity witchity witchity,” and myriad Red-winged Blackbirds calling out like tiny firecrackers over the water.

It felt good to walk, even with the cloud of tiny insects that surrounded me like an odd, buzzing hula hoop the entire time. At least, I couldn’t claim that I was alone.

There was a definite feeling of energy in the air. Grey overhead, wind moving through the woods, a change in the weather.

As I wound my way around a trail headed back toward the parking lot (my kind of parking lot, just a dirt and gravel strip), I shrieked and did some kind of shimmy aside as a tiny frog hopped in front of me. 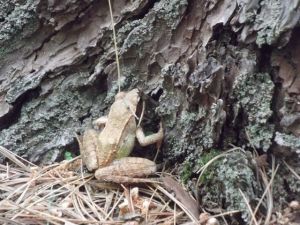 It was beautiful, a bronze shimmer, reminiscent of the poison dart frogs I saw when I was in Costa Rica. I studied this tiny wonder, thanked it, apologized for nearly stepping on it, wished it a good day, and carried on. Loud voices and clapping up ahead reminded me that solitude is fleeting in Massachusetts. I was thankful the frog was safely off the trail, even though the group was moving in a different direction. I wondered for a moment what other people would have done if the frog had crossed their path. Were there people who would torment the wee fairy? I pushed the thought out of my mind. I have a friend who has told me time and again to be aware of the energy I send out into the universe. If I think or feel something I don’t truly wish to be true, I now repeat the words “that is not my intent” and try to shift my thoughts to something more positive.

I have my moments.

I would say I felt refreshed after the walk. In truth, June in Massachusetts is far too humid to allow for this kind of effect. But I suppose I did feel somewhat lighter as I returned to pavement and joined ever busier, crowded thoroughfares.

At a time when I feel distant from so many people who are dear to me, it is a precious gift to be in solitude and to be at peace. 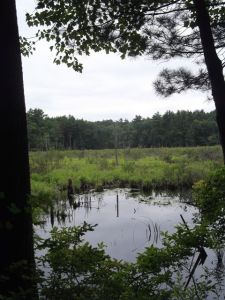