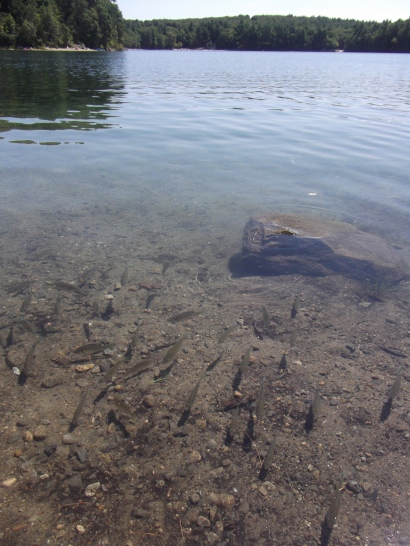 The fish were not the only creatures to welcome me ashore after my swim at Walden Pond this morning. My father sat on a rock waiting for me as well.

He has been reading a book about Einstein’s mistakes. Apparently, many of our scientist heroes were fallible, human even, and there is a scientist writing about it. Some altered their findings to make their work appear more credible. They knew the theory was correct. You know those perfectly colored peas from Mendel’s genetic experiments? Turns out they too were part of this trend, not quite the element of perfection I learned in school.

Yet Einstein, even with his imperfections, was indeed brilliant. And he is known across cultures and generations. In his fame, he has become a noun in the English language.

My dad told me about a professor, a New York Jew, who teaches out in California.

“When he lectures,” my dad told me, “there is no doubting where he is from.” He laughed. My dad has a wonderfully, good-natured laugh and a soft, gentle voice. I have always loved listening to him tell stories.

The professor’s father was a plumber in New York City. When he was a young man, he worked as a plumber with his father. One day, he told his father that he wanted to study to become a physicist.

“Oh no,” he father replied. “No son of mine is going to work at one of those drug stores.”

“Not a pharmacist,” the young man corrected him. “A physicist. Like Einstein.”

“Oh!” his father said with relief. “Alright. Go on, then. Be an Einstein.”

We cannot all be Einstein, but we can appreciate his insights and contributions to the world.

I showed my father my prized find on my walk around the pond—a feather with a strip of grey along the right side of the spine and a narrower band of blue on the left.

The blue is not really blue, I explained to him. I don’t remember the science behind it, but it has something to do with the refraction of light.

Just like the sky, my father replied. It was Einstein who discovered why the sky is blue. The author of this book I am reading admires Einstein even with his faults.

And my father quoted a line from the book, “When you look at the sky, turn your mind to Einstein.”

And now, I believe I will.

2 thoughts on “Turn your mind to Einstein”