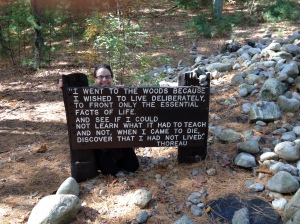 For the past three years, I have entered into the cool waters of Walden well into the autumn. My goal has been to swim until October and later, if my body can withstand the fast cooling temperatures of the deepest pond in Massachusetts.

This year, I have surpassed the October 1st goal by several weeks, all in thanks to the inventor of neoprene. Around this time last year, I received a wetsuit in the mail with a letter that read, “Now you can swim until the fish freeze!” I never had the chance to use it because the weather was not nearly as hospitable as it has been thus far this fall.

Hospitable it has been. Warm, humid, rainy, windy. Perfect for a dip in my favorite pond.

When I swim, I feel as if I have been granted the gift of entering another world. I am far away from the troubles of land dwellers. I can move my arms and legs and meditate on being surrounded by a liquid universe.

This past Tuesday, I swam way out to the middle of the pond. I kept my head above water, not feeling quite bold enough to get my hair wet. The possibility of hypothermia, even with a wetsuit, was not particularly appealing.

With my head above water, I could survey my surroundings in detail. A small commotion on the surface drew my attention. I noticed a tiny insect. Upon closer inspection, I saw that it was a wasp. It seemed to still be alive, so I placed by hand beneath it and gently lifted it above the surface of the water. I moved my fingers apart to let the excess water drain and tried to turn the creature over ever so gently. Its drenched body seemed so very fragile compared to my own. I felt like a giant sea creature, rising to the surface to aid in the rescue of a fellow traveler.

I tread water. Gradually, the wasp began to dry off and explore the surface of my hand first, then my sleeve. As one arm would tire, I would transfer it to the other. I knew this could not last indefinitely, but what to do? I am fully aware that humans with the best of intentions who interfere with nature’s systems often do more damage than good, yet I felt a kindred connection to this wee beast and wished to help.

Finally, a solution came to me. It seemed at once obvious and brilliant in its simplicity.

I could place it on my head!

I transferred it to the curly domain and continued my swim. The trip was successful apart from one mishap, where the wasp buzzed by my ear and my instinctual reflex to swat at it sent it flying back onto the surface of the water. 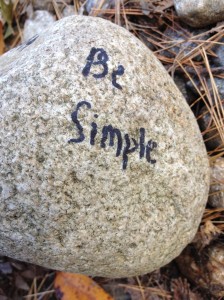 Two thirds of the way through my regular route, I noticed a second wasp. You might imagine what happened next.

Up and out of the water it went and onto my head.

Apart from a few moments of little legs wandering onto my forehead and causing a tickle, all went as planned.

As I swam toward the shore, my dad was standing waiting for me.

I stood up and walked toward the water’s edge.

“Are there two wasps on my head?” I asked him.

He took a close look. “Why yes, there most certainly are,” he responded.

I explained how I had found them and asked if he could carefully transfer them from my frock of curls to the shore.

“Don’t worry, they will not sting you. They like the warmth from your hand. Just place your hand beside them, and they will crawl onto it.”

Which is exactly what they did. In a bit of a daze, one wandered directly back into the water and had to be rescued yet another time.

Where they are now, I cannot say. But I wish them well on their journey, as I wish for you on yours.

“I should have taken a picture while they were still on your head!” my dad exclaimed after they were well on their way.” But it was too late. I guess some experiences are not meant to be captured beyond the fleeting beauty of a memory.