This morning, I woke up at 5:30am and was wide awake. I cried a little and then went outside in the fresh, fresh air. It just felt so good! I came in and slept for a little longer and then just had to get up and run around the house. Breakfast was amazing! I ate it so fast and then ran around in circles. Then, I threw it all up on the rug.

I drank some water, played with some of my favorite toys, and then I pooped under the piano. I just couldn’t help myself. When you gotta go, you gotta go. You know?

My mom had to do errands, so we went in the car. I looked out the window for a while, but then I was tired so I went to sleep on the back seat. I seem to get tired a lot these days.

We went downtown and in and out of a few stores. As we walked along the sidewalk, I breathed in deeply and just took in all the smells. It smelled amazing!

Everywhere we went, people were just so nice. They wanted to caress my head and whisper the sweetest things. Sometimes, it was even a bit shocking the things they said. Luckily, my blushing doesn’t really show up.

My mom wanted to go into a store that had cold air coming right up out of the floor but only in one spot. It was just so weird. I tried to attack it and stop it to protect her, but it just kept coming and coming. She did not seem concerned, so I ran around her legs until she nearly fell down. She just laughed! I couldn’t believe it. How could she not sense the urgency?

To try to increase the alert, I ran around the store in a whirlwind. Every time I seemed to get into a fast groove, something stopped me.

Finally, out of desperation, I ran behind a counter and peed on the floor. That will show her!

Instead of gratitude, mom yelled at me and dragged me out of the store.

Can you believe it? I saved her life! I got her out just in time.

Later in the day, my mom and I were sitting on the porch. It was finally cool enough to sit outside. We played and laughed, and she gave me one of my favorite treats to snack. I just felt so happy.

Then, I heard my favorite sound! A car pulled up in the driveway, and my dad got out. I was so happy! I followed him inside the house and ran around and around to show him how fast I could run. I ran fast just for him!

Dad did not like that. He yelled at me, picked me, up and brought me outside. I cried and stared at the ground. I was just trying to impress him.

I was so sad…hey, look at that stick! 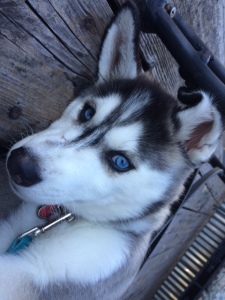