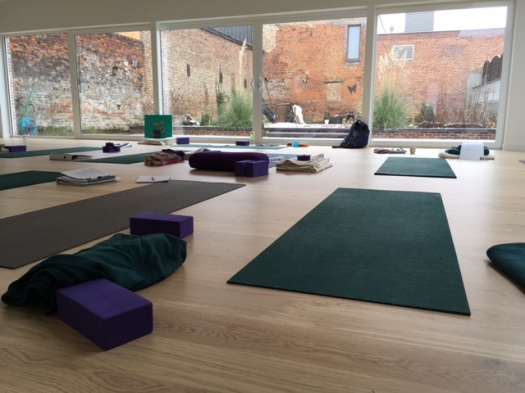 I spent this past weekend in a teacher training for Anusara yoga. The training was held in English, which was the common language for everyone in the studio. Before moving to Brussels, my husband told me that when he had gone on a PhD reconnaissance mission the city had felt very international. He had that right.

My first weekend of teacher training was kind of like studying yoga at the United Nations. There were people from countries around the world in the room and only two who were actually born and raised in Belgium. We had yoga representatives from Holland, Mexico, the United States, Finland, Italy, and Austria. If you add the people they were married to, we also had Estonia and Germany spoken for. Additionally, everyone spoke two or more languages fluently, and their English was far superior to my French. It was really quite incredible.

Fear ruled a great deal of my first weekend of Anusara training. It is ironic, since Anusara means opening to the flow. I am not a particularly roll with the punches kind of being, so there are many opportunities in each day and in each new venture for me to practice my yoga off the mat.

Was there anything really worthwhile to worry about? Not really, but my mind worked hard to find what little there was to fear. It began with my commute back and forth from home to the studio.

First, I was afraid that tram 44 did not exist. Then, I was afraid that if it did exist, I would miss the connection between the time that tram 94 arrived at the Musée du Tram stop and the 44 was slated to leave, since there were mere seconds to maybe a minute before arrival and departure times. Once I had made the connection from 94 to 44, I was then worried that I might not get off at the right stop. In fact, I did nearly miss the stop for Tervuren, but I figured it out at the last moment. 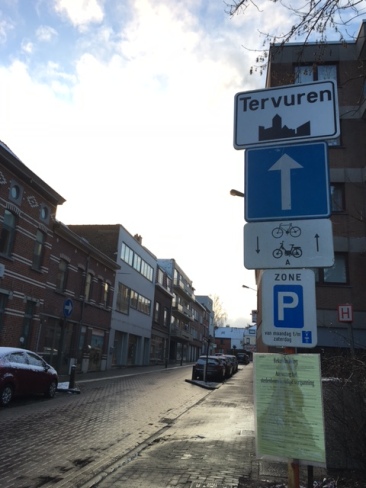 Successfully arrived in Tervuren, I then worried that I might not find the studio (I have searched for places that exist on Google Maps but are not actually present in real-time, at least not in this version of reality).

Fear does not serve much positive purpose, though I do recall my AP Psychology teacher in high school telling us that a healthy dose of fear or apprehension about a test can help you perform better. At this point in my life, fear only seems to make me a bit crazy; well, crazier than usual and not really the good kind of crazy (I had a friend tell me one time that I was fun wacky, so I guess that most of the time I am an acceptable kind of nuts). This was not one of those times, and I knew it. I was texting my husband every few seconds about every possible line item that might go wrong.

When I still clearly was not taking this advice and then texted to ask if was annoyed with me, he wrote,

I then sent profuse apologies by text (seriously, I really need to stop apologizing all of the time).

My husband wrote back, it is fine. Now, just breathe and stop worrying.

If only! At least I was headed to a yoga studio, so the chances of my breathing and practicing surrender were increased several fold.

After a bit of wandering back and forth around the spot that Google Maps told me the studio was located but which seemed to be a street lined with shops across from a construction site, I figured out that I needed to walk down a little neighboring side street. There it was! A little brick building with a forest green square sign with a white tree painted on it. It would do Gandalf and Tolkien proud to see such a tree.

The sight of that tree did wonders for my spirit. I cautiously opened the door and was greeted by love and acceptance in the form of the studio owner, followed by the smiling faces of the other students in the class.

What if they don’t like me? I had asked my husband before the training. They all know each other and have been studying together for months. I am the new kid.

Don’t worry. They will like you, he assured me.

I was early to the training, benefits of not yet trusting the timing for getting places via public transit. I introduced myself to the teacher and made myself relatively scarce to allow him to prepare for the day. I chatted with the studio owner and learned that she was also American and had married a Dutch man and eventually moved to Belgium.

Much of the day was a blur, but I do recall being warmly welcomed by every woman in the training. One student offered to walk with me to help me find a local sandwich shop, even though she had brought her own lunch. We laughed and talked as we walked through the little town. The sandwich shop was a hilarious experience. There was a patisserie on one side and a place to order sandwiches on the other side. I had a time of it trying to order a sandwich and buy bread and a chocolate croissant for my sweetie. Finally, I brought everything to the register, but they would not accept my credit card. I didn’t have quite enough cash, but my new yogi friend was kind enough to lend me a euro.

Over lunch, three of us chatted away like little birds. During the training, I was met with smiles and kind words. By the end of the day, I felt relaxed and also exhausted.

Did you have fun? My husband texted me on the tram ride back.

Yay! The other yoginis accepted you?

Later in the evening, I confessed concern over whether I was good enough to be in the training.

After dislocating my shoulder in college and experiencing recurring sublex in the years following the accident, getting up into a handstand is a bit of a frightening thought.

The next morning commute, I was a barrel of nerves again. I had gotten up early to add more rides onto my metro card, but the machine kept asking me for a pin that did not exist for my credit card. I looked up at the near full moon and wondered if the universe was having a little laugh at my expense. 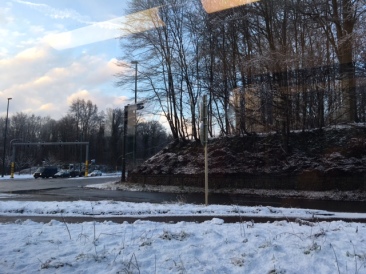 My husband texted me, Practice tramming meditation…just try and “be”…it sounds like your mind keeps trying to find something to “do” and since you are stuck in a tram, it decides to “do” worrying. Instead, try meditating.

Ok, I wrote back. I love you. Please don’t leave me!

In addition to fear, low self-esteem, fueled by the voice of my inner critic, is my other constant demon. My husband offers grounding to my propensity to live in fight or flight mode for much of the day.

I sat quietly on the tram, looking out the window at the blanket of snow on the ground and frost-covered trees.

I wrote previously that I have been sick for most of my brief tenure in Brussels. Having spent weeks on the couch and in bed, I was nervous about being able to make it through two one hour and a half morning yoga classes. While I was exhausted afterward, I found the movement grounding. It even seemed to help reduce the chronic cough I have been experiencing for over a month.

For each class, my inner critic was right there with me on the mat, however. Every time the instructor adjusted my asana, I could hear the voice of my critic.

He thinks you are not advanced enough to be in this class! Came the voice. Even with my little cough drops with little phrases meant to encourage, I felt discouraged.

Despite the arguments from my rational mind, I listened to my critic. It is often easier to give in and to accept that people see the qualities in me that I fear the most worst in me than to believe otherwise. Over lunch, my new yogi comrades assured me that I had nothing to worry about, and I found my Self breathing a little easier.

By the end of the day, I was completely worn out and overwhelmed but also inspired.

It’s all practice, I thought to my Self as I hustled to catch the tram, walking carefully so as not to slip on the icy sidewalk. Practicing yoga in the Shiva room, I was reminded that Shiva is one who destroys and also creates. In my own life, I seem to move in the shadow of Shiva, uprooting my Self and leaving all that is familiar in order to create a new existence in another place.

Yoga is a push and pull, and this is my mantra. My practice now is to accept and surrender to Shiva. Everything else will be revealed in its own time.

1 thought on “In the shadow of Shiva”