I joined my husband this week for an academic foray into Germany, where he will be presenting at a conference for the Society of Philosophy and Technology on Friday. I am hoping that I will be able to sneak in to film his presentation, but in the interim I get to wander around the city of Darmstadt.

Darmstadt is a new place for me, and it took a while for the name to imprint itself into my memory. I have been studying with an Anusara teacher who lives and teachers in Amesfoort in the Netherlands, and my brain decided to combine these two foreign places.

Where are we going again? Darmsfoort? I asked my husband every couple of days.

No. Darmstadt, he would patiently reply.

It took me a while to figure out where the foort was coming from. Even when I figure it, it still took me a few minutes to make the switch in my mind before speaking the words out loud.

Sometimes, I wonder how they gave me a PhD, but that is a story for another time.

We left our two cats this morning to a quiet house, their food and water bowls filled to the brim in anticipation of our absence. We decided to splurge and pay a few extra euros each to take the train instead of the tram, then metro, and then bus to get to the airport. When possible, it is starting to feel reasonable to pay a little more for ease.

We made it to the 94 tram with a few seconds to spare after running up the hill when the transit app said we had only two minutes.

What’s a trip without having to run? I said.

We took the tram a few stops to the train and headed for the airport. The entire trip to the airport in Brussels and then on the bus from Frankfurt to Darmstadt (got it this time!) took far longer than the mere 40-minute flight. It’s still remarkable to me that you can fly to another country in so little time.

We walked from the bus to the hotel. On the way, we saw many people riding bicycles, including one young woman on a monocycle.

That does not look easeful, I said to my husband.

When we arrived, my husband asked the gentleman at the front desk if he spoke English.

You have a reservation?

Ah, Mr. Lewis. You are here for five nights.

But what are you going to do in Darmstadt for five nights?

I am here for a conference, so the question is what is my wife going to do for five nights?

It wasn’t until the end of our conversation that he said, Wilkommen. Welcome.

This does not bode well for Darmstadt, I said after we had stepped into the elevator and headed up to the third floor.

It took a few attempts to figure out how to get the door open, and once inside I went straight for the air conditioner.

I can’t figure it out, I said. The heat and fatigue from travel (any amount of travel seems to exhaust me these days) was making me cranky.

It was my husband who figured out that you have to put the card key into a little slot by the door in order to turn on the lights or air.

That is brilliant, I said later after I had rested and had a snack (I have the metabolism of a squirrel, so I need to eat snacks on a regular basis to keep from being called Cranky Britches by my husband).

You can save so much energy by not running the air when you aren’t in your room.

Yeah, and this way no one can forget to turn the lights off either.

Score points for Darmstadt and Germany!

We went for a walk around the town.

We pondered over German words, stickers, and graffiti.

What does bembel with care mean? My husband asked.

I don’t know. I was just wondering the same thing.

We found the answer at the grocery store.

It was fun being in a new place. We took photos to share with family and friends. My favorite was the sign that read, Schmuck for sale inside, which I promptly shared with my Jewish mother. I marveled at how many places had vegetarian and vegan options.

We stopped for a drink at a place a friend from the town where I grew up had recommended. Over drinks, my husband looked up places where we might go for dinner.

But you are a vegetarian?

He showed me the review, and I laughed out loud.

Best in town….but, well….it is Darmstadt.

We finally settled on a little Mexican place right near the hotel. We hadn’t eaten Mexican food since leaving Arizona last summer, and the thought of cilantro-laden salsa and tortilla chips was beyond enticing. 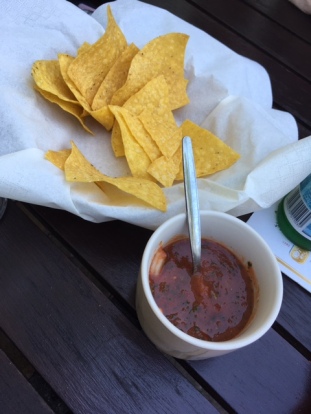 Our bellies sated, we headed back to the hotel for some whisky, stapel-chips, and dinkel doppel keks. All in all, it was a nice start to our little adventure across the border. 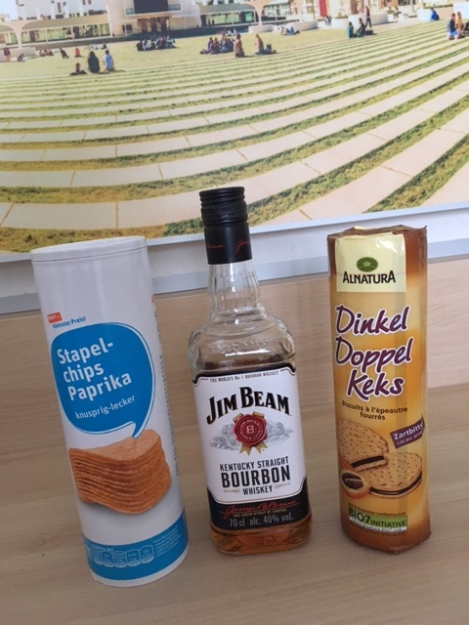