My husband and I recently visited the city of Leuven for the first time in our three-year tenure in Belgium. Without a car and with a big white husky in our purview, we do not tend to stray too far from Brussels. It becomes an all-day endeavor to venture into the regions of Flanders or Wallonia on an exploratory excursion, far too long to leave husky home alone. In the beginning of our time with our rescue husky, he had extreme abandonment stress and anxiety. It took a full year to be able to leave him home for a few hours. A day trip without him was not possible, and it was also stressful (and therefore not very fun or enjoyable) for my husband and me to travel with husky in tow. Since husky has mellowed and become more accustomed to life with us, we have been able to bring him with us for longer adventures. It means we don’t frequent museums or places where four-legged family members are not allowed, but we do the best we can.

So after three years in Belgium, we finally made it to what I referred to as “one of the big L cities” (the other being Liege in French Wallonia). What brought us to Leuven? A typewriter, of course. My husband’s typewriter obsession began with an Olivetti he found at a neighborhood brocante (flea market). He wallowed over the price of 30 euros since we were living on his unfunded doctoral student budget. What happened next was a paradigm shift.

My husband learned all about the history of the typewriter, which came as no surprise considering his background as a research librarian and time spent working as an archivist. He moved on to learn all about the inner workings of the typewriter. He had been previously interested in the old models of cameras he found. I even found an old camera shop that still sold and developed film for the models he had found at previous brocantes. His passion shifted from old cameras to old typewriters. His research expanded to include other models, including the model of Royal Quiet Deluxe upon which F. Scott and Zelda Fitzgerald typed their party invitations in Vogue font. This turned out to be the holy grail of typewriters. I began searching for this typewriter on Etsy and ebay, emailing sellers to ask if they could send a photograph of the typeface so I could see what the font looked like. Innocent enough. I received a response to an early email to a seller on Etsy who advised me not to mention anything about the Vogue font, so I remained cryptic, a wife looking for a typewriter for her husband as a graduation gift.

I never expected to actually find the rare Royal with Vogue font and certainly not for the “low” price. I wound up showing it to my husband in advance to double and triple check the font and the price. I paid about a third of what these typewriters can sell for, but it was still more than I ever imagined spending on a typewriter (or things we actually need like groceries, for that matter). The typewriter shipped from California to my husband’s brother’s house in Portland, Oregon. We Facetimed for the “unveiling” and practice run to make sure the machine worked and to witness the font in real time. It was an exciting moment, to be sure.

I have even been swept up in the typewriter craze that has befallen our household. I went a bit nuts myself, looking for an affordable model of the 1950s Royal Quiet Deluxe with Farnsworth font. It’s not Vogue, but it’s pretty cool. Of course, one difference between the typewriter trade in the US and in Europe is that in the latter typewriters have become a super trend, particularly as décor for hipster weddings. Throw in the additional popularity thanks to the documentary Tom Hanks put out about the typewriter, and the sale of typewriters has become quite lucrative for the sellers and nowhere near our budget as buyers. Don’t get me wrong, I am thrilled to see typewriters getting their due but now I can understand why old school typewriter enthusiasts the world over have been groaning. They have been in it for the long haul, and suddenly the market has gone topsy turvy.

One benefit of living in the EU is that the craze does not seem to have spread to this side of the Atlantic as yet. This means that you can still find incredible deals at local brocantes and online second hand sites. This also means that our typewriter collection has grown from a single Olivetti to two digits within a very short span on time.

My husband is writing his dissertation, and like any student (myself included when I was writing my own dissertation) he needs some downtime for his brain and he has a propensity to procrastinate. He passes this restorative time, poring over second hand sites the world over in search of the next typewriter on his dream list.

This is my last typewriter, he has told me several times after bringing yet another machine home. I just roll my eyes. I adore him and admire his passion. I also can understand well the tendency to become passionate to the point of obsession with something. Apart from the periodic pang of horror and fear over how we will ever get these heavy beasts from Europe to the United States when we return to Arizona in less than a year, I am entirely supportive. I especially love that it means less time plugged in to the virtual world, which seems to be wrapping its tentacles ever tighter around our species. There is no escaping the pervasiveness of the smartphone, and people seem less and less aware of the other people in their physical proximity in exchange for participation in a virtual exchange.

And so the household collection has grown substantially in a short amount of time. There are models with AZERTY keyboards as we are living in a region of Belgium where French is spoken and France is a relatively close neighbor. There are models with QWERTZ from German-speaking regions. Triumph, Tippa, Erika, Hermes Baby, and beyond.

Somewhere between typewriters five through 10, I starting feeling left out. This was when I began looking at the Royal Quiet Deluxe. Since the Royal typewriter company was based in the United States, the build of these machines are sold there (and for the exorbitant prices I already mentioned). My husband began showing me other similar models made in European countries that I might like. The keyboards were Azerty instead of the US Qwerty, but other than that they were quite adorable and even more importantly, very affordable! Since I text with both English and French speakers on a regular basis, I have grown accustomed to typing on the two different keyboards. It is almost second nature, just as with switching from speaking English to French.

When my husband showed me what looked like a mint green Princess, made in Germany, I was hooked. The seller had listed it with a Remington. My husband sent an offer and received the response that the seller wanted to try to sell the two machines together.

She’ll fold, don’t worry, my husband said each time I would ask if the Princess was still available.

Eventually, the Remington disappeared from the ad and only the Princess was listed (at the same price as the original two). We raised our original offer five euros, and the seller bit. We went the same day to check it out.

In person, the color turned out to be a much darker forest green but it didn’t matter. Princess was a beauty! I tried it out and loved the action. We brought her home. My husband cleaned her up and has started to do some work to try to fix the rolling carriage, which will move the paper to a new line but will not roll back if you need to return to a previously written line higher up on the page. 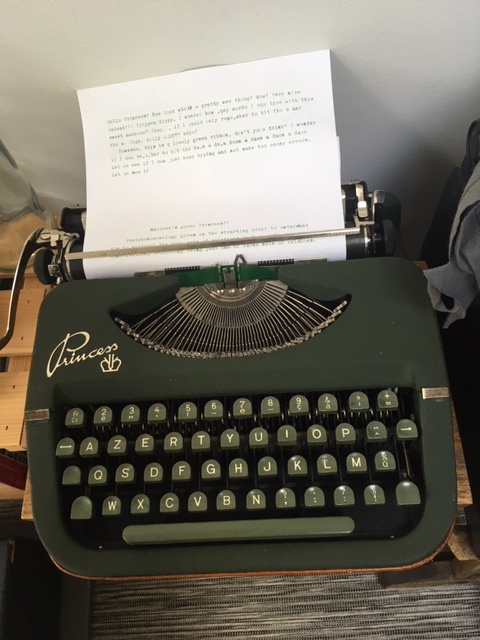 I have started to refer to our home as an animate being and inanimate object rescue, and Princess is simply in the recovery stage. Hermes is another rescue in recovery. Hermes came without the lowercase letter i. It has been a research process to find someone with the little piece, and now that we have it we (or my husband) will have to pay a visit to the typewriter repairman Guy before he retires and closes his shop outside of Antwerp.

After Erika arrived, I suggested that we only adopt typewriters with first names. Of course, this fell to the wayside when we went to Leuven to collect the Torpedo. To be fair, just because I don’t know anyone by this name, I suppose someone could (and may already) have named their child Torpedo. Why not?

The Torpedo was discovered through a second hand online site. Arrangements were made to meet at the train station in Leuven for a Saturday morning. We had great train karma (meaning we made all of our connections and didn’t have to wait for a later train) and arrived right on time.

We walked out of the train station, and I noticed there were people on bicycles everywhere. Bicycle culture is not pervasive in Brussels. Drivers do not seem very aware of the presence of bicycles, though I will say they are amazingly kind toward pedestrians. They will slow to a halt if it seems like I am pondering crossing the street at a crosswalk. Having grown up south of Boston, this is impressive and still surprises me every time. Instead of flipping drivers the finger, I can wave and smile. Such a beautiful thing!

Out husky Atticus was quite popular on the train ride to Leuven. A toddler in the row in front of us cried and waved her arms until her mother sat her down on the floor to greet the dog. Anytime her mother attempted to pick her up, the child wailed in protest. Atticus was very gentle with her. 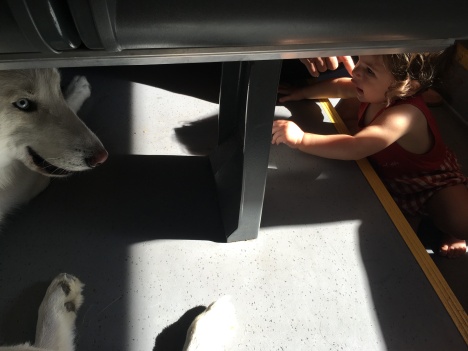 We met the typewriter seller around the corner from the place we had exited the train station. He had leaned his bicycle against the wall, the typewriter strapped onto a little stand on the back. My husband chatted with the man, who explained that he had stopped working a few years ago after being diagnosed with cancer. The typewriter had belonged to his father, who had been in the military. He could remember his father typing on the machine when he was little, but then it had been packed away and hardly used in the decades that followed. It was in quite pristine condition, I noticed as my husband typed on the keys. 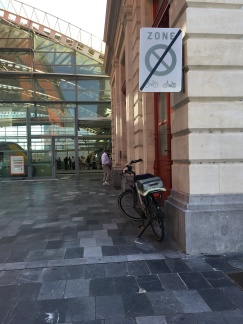 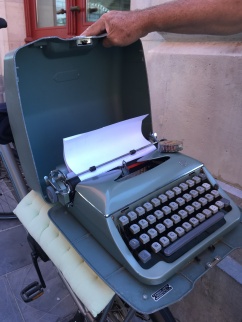 We ate lunch at a little café nearby. There were carnival rides being setup on either side of the café. We then spent the afternoon wandering around the city center. I went into a few shops. People oh’d and ah’d as we passed and asked to take photos of the dog. By the end of the afternoon, we were melting and more than ready to head back to the train station. As we walked down the tunnel that led to the train platform, my husband stopped. 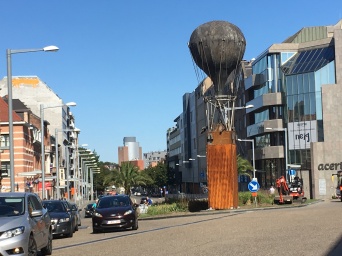 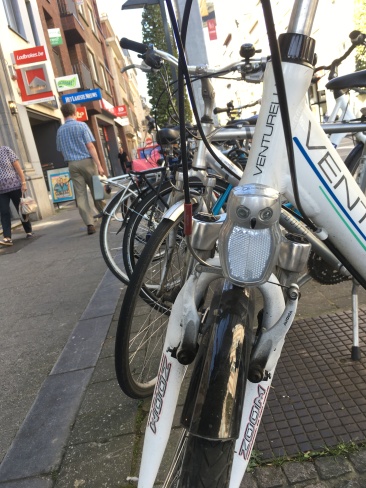 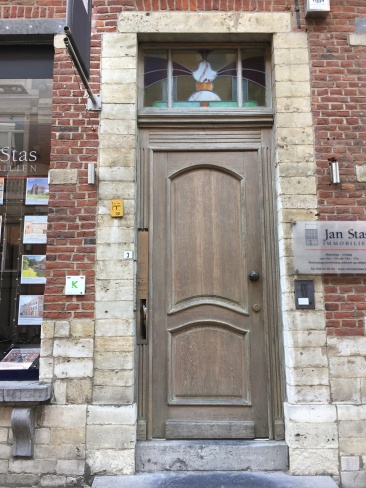 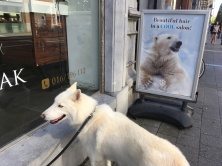 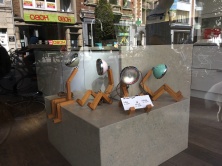 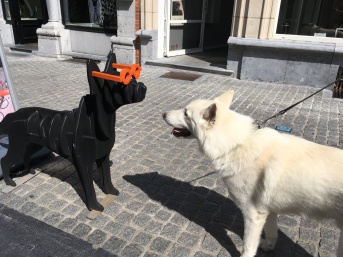 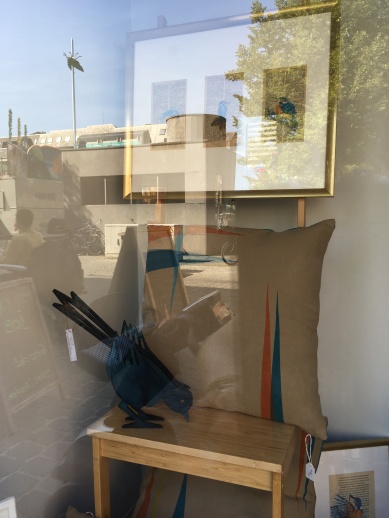 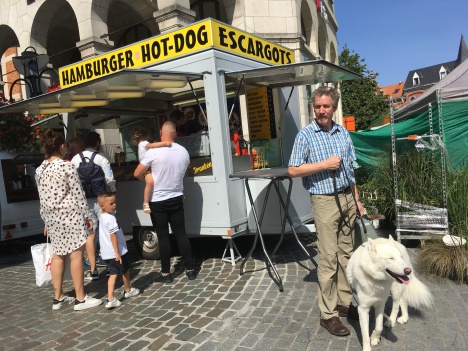 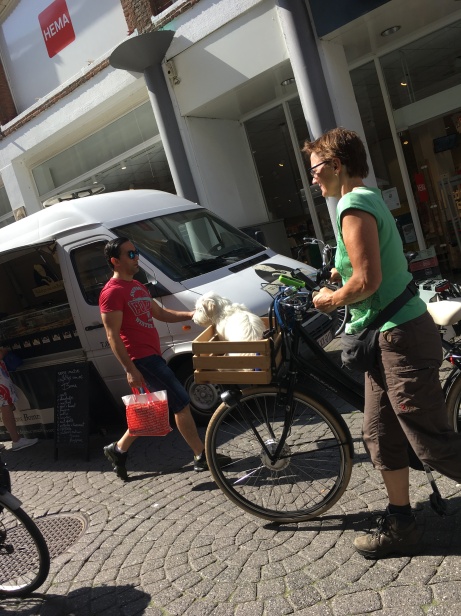 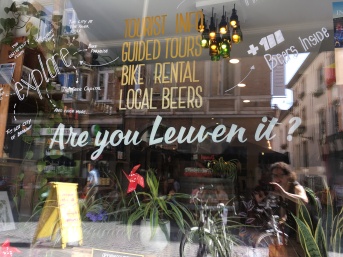 Lockers, he said, pointing to the wall of lockers that lined the tunnel. They had been in plain sight when we first arrived, but we hadn’t even noticed. 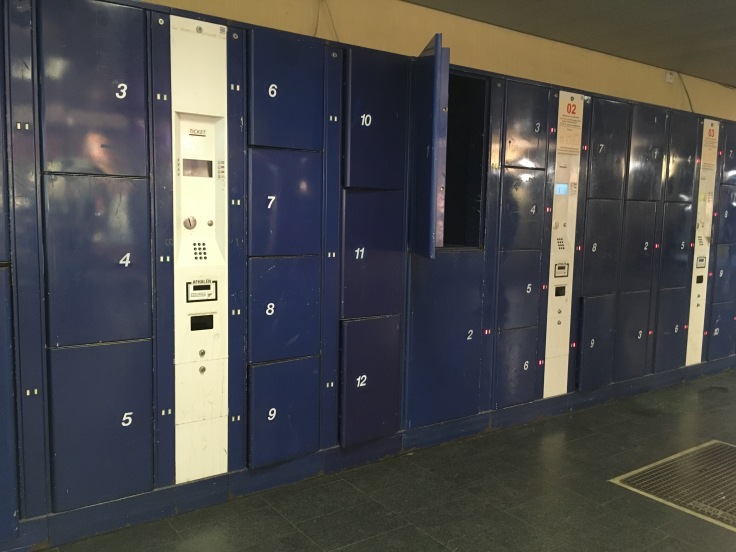 Our own awareness has increased in the brief time we have spent becoming acquainted with antiquity. Setting aside the ever-present smartphone has given us the opportunity to slow down and take a look around. Perhaps with more practice we will notice the lockers faster next time.