I have always had a strong attachment to stuff. When I was little, my stuffed toys were real. Ok, I am still fairly little and nearing 40 and I still think my stuffed animals and many other inanimate objects have their own life paths and destinies. The more things change…

I have thought about where my strong attachment to stuff comes from for many years. I have written about it. I have come up with my own set of rules for what things I can let go of, which is an important practice for a person who moves so frequently. I have read Marie Kondo. I have picked up many possessions and asked the question, does it spark joy? Since I am me, I have also over analyzed that question to the point where I no longer can remember what “joy” feels like. Or I wonder, what if it does not bring me joy in this moment but it might at a later time? I don’t want to regret giving something away that might one day bring joy. Maybe, I am just not currently in a place where I can experience joy, but someday I might experience a breakthrough from this depression and emptiness. And when that day comes, I will be so thankful that I held onto this hooded sweatshirt that I haven’t worn for over a decade.

Even the things I do manage to send along on their own life journeys I have started to photograph, just so I have an image of them to carry with me. I take photographs of creatures who have passed on so they won’t be forgotten. I have taken photographs of photographs I have found discarded on the ground, as if I worry the person in the photograph might cease to exist somehow just by virtue of the photograph having been left behind. I photograph plants growing in places where past experience tells me they will someday be destroyed. So my own story (sanity) goes… 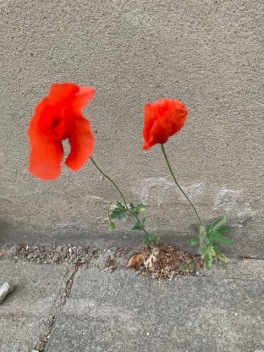 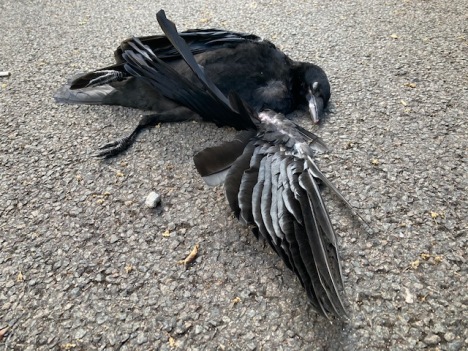 There are moments of clarity that arise on this analytical and embodied journey, and sometimes they appear when I least expect it. Often when I am working on a creative project and am experiencing a block, a simple change of scenery can elicit a shift that helps me to move forward. This can be as simple as getting up and going to the bathroom. I have many melodic epiphanies when I sit down to pee.

This afternoon, I experienced clarity that did not involve my bladder. My husband and I had walked over to a friend’s house to borrow a coffee pod holder to see if it would fit the Francis Francis espresso maker we bought from him the day before.

We were sitting in a little room with big windows, chatting about different cultures, places, and times in history. Somehow, we got onto the topic of Hitler and family origins. He asked if I had visited the places where my ancestors were from; namely, my grandparents on my mother’s side and my great grandparents on my father’s side.

I told him I hadn’t visited and also that I wasn’t sure anything was even left of the lives my relatives had led in these places.

We continued talking, and then my husband asked about a narrow, vertical drawer hiding at the top right corner of the secretary. A secretary is an antique piece of furniture with a wooden panel that you can pull down to make a desk. It turned out that the narrow, vertical drawer could be pulled out to the desktop could rest on it when you wanted to open the secretary to use it as a desk.

The conversation went in infinity circles, cycling back to themes we had touched on earlier, as conversations often do. Our friend talked about flying back to Canada a couple of times over the past year and how easy it had been to navigate. The people were so friendly. Things were easeful and easygoing.

My husband pointed out a tiny rocking chair and mentioned it was, “Marieke size.” Our friend explained that both the rocking chair, the secretary, and the colorful wooden trunk had all come from an old farmhouse his father had bought on Prince Edward Island (PEI, had called it, if you want to learn a little Canadian acronym lingo).

Our friend spent the first part of his life in Montreal. His parents had discovered PEI and brought him there for summers. They were so enamored of the island that they had asked a local if there were any cottages for sale.

No, they were told, but there was an old farmhouse that the owners hadn’t visited since they moved to Boston years earlier. Maybe they might be interested in selling. They should give them a call.

They did call, and the owners, of the family Merrill-Lynch, had indeed been interested in selling. They sold for $7k the 100 year old farmhouse on 16 acres in 1990.

My jaw about dropped at the price.

The farmhouse had been full of antique furniture, and part of the sale agreement was that the sellers’ daughter could come at any time and take any of the furniture she wanted, which she did, nearly 20 years later. She arrived with a truck and took several pieces and left the rest.

He pointed to the secretary and spoke of our he was using it as a desk with his laptop but long ago it had been used with a quill and paper.

And then a thought occurred to me.

I wonder if my strong attachment to stuff stems from the fact that everything that belonged to my ancestors has disappeared?

I mean, there are probably pieces of furniture just like this, sitting in people’s home all over Europe. Everything that belonged to my family is gone.

In my mind, it’s a plausible theory. I have recently been revisiting the reason I am so drawn to consume. Even though I am overwhelmed when I have too much stuff, if I manage to get rid of stuff I seem to replace it almost as quickly as I let it go. Not to mention the things I have reclaimed, which is another psychological study in and of itself.

I listened to an episode of This American Life sometime in the past year or so (I have listened to hundreds as a way to create a sense of sanity and space on public transit). The episode was called The House on Loon Lake, and it told the story of a young boy discovering a house that had been abandoned. Inside of the house were all of the belongings from the family that had lived there. It was like they had just disappeared one day, leaving everything behind. Cans of food, furniture, photographs. All just waiting.

Listening to the episode, I keenly connected with the boy’s desire to hold onto some of the items he found. He described the sense that he wanted someone to remember these people. I won’t give away the ending. If you feel a connection with stuff in this way or just enjoy a good story, I highly recommend having a listen.

I feel that desire as well. I don’t want to give anything away because I don’t want it to be forgotten. I don’t want the stuffed bear or donkey that my dog ripped apart and that I painstakingly sewed back together to wind up in a landfill, abandoned and forgotten. If I set them on our window sill, someone will certainly take them, but will they love them as they deserve to be loved? Is this a feeling I have for this objects, or is this a projection of my own fears? Do I also have a fear of being abandoned or forgotten?

Sitting in my friend’s living room, I felt a longing to be reunited with the possessions that had once belonged to my family. The pieces that told a story of the people whose lives have led to mine.

My ancestors left their homes with only the items they could carry. Everything else was left behind. Lost. Reclaimed by other people, but lost to the generations of my family that came after.

My mom has always loved old things, too. She drove all over the southwest and the Dakotas, collecting antique pieces of furniture. I have some of those pieces now, albeit they have been sitting in storage for the past four years. I still feel them with me, across a continent and an ocean. They might just be stuff, but they hold meaning for me. Has my mother, too, been trying to find a way to create a new storyline of belongings for our family? Can these antique pieces replace those that were lost?

As I write, I realize there are no words to accurately describe the hollowness I feel, thinking about this loss. I know it’s only stuff. I know the important piece is that I am alive to write these words because members of my family “got out,” escaped with their lives. And yet, as I think about the idea of reparations for persecuted people I realize that I, too, want what has been taken to somehow be restored.

Could I somehow embark upon a kind of ancestral scavenger hunt? Could a photograph show me a piece of furniture that I could try to find? It seems impossible and probably not worth the time and energy it would take, and yet I can’t help wondering it maybe…

To me, these musings are completely normal. In the least, they offer a glimpse into the inner workings of my mind, if that is of any interest to anyone beyond me. There is a kind of obsession I can easily stir up when I think about a piece of jewelry, or furniture, a trinket, an instrument.

Perhaps, you have also gone down a similar rabbit hole? Maybe on the subject of stuff or something else. A part of your family story that was cut off from continuing and then completely erased and you are trying your best to fill in the missing pieces or to try to write the last chapter in your own way even though the original author(s) are not there to tell you how it ends.

I have so much trouble letting go of (of everything, not just my own belongings), and I wonder if maybe, just maybe, this stems from the trauma I have inherited from those who came before me who had no choice but to give up everything or risk perishing altogether. Had they stayed, they would have certainly disappeared from this earth, quite possible literally going up in smoke. Ashes to ashes, as they say.

I am alive because they refused to accept the ultimate inevitable attachment before their time. In their wake, I have inherited an ultimate emptiness in the heart of being. I am ungrounded, with only the objects I collect to link me back to the earth. Without them, I might float away. 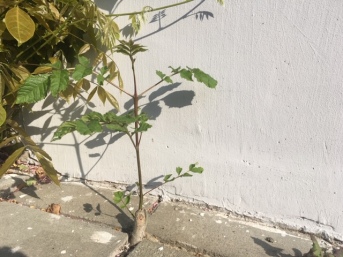 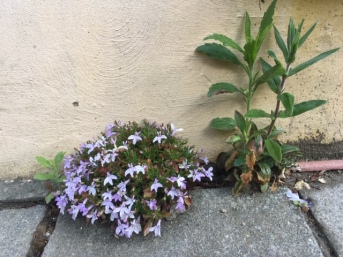 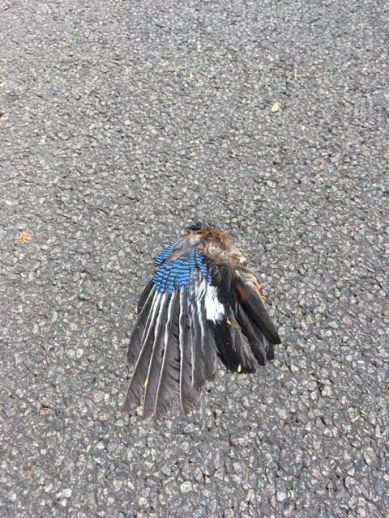 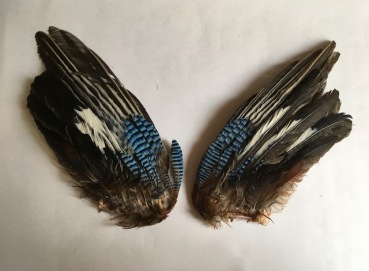 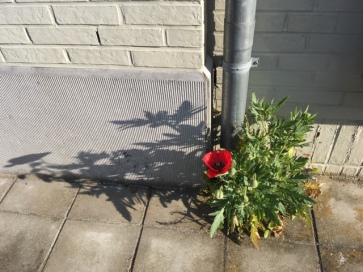 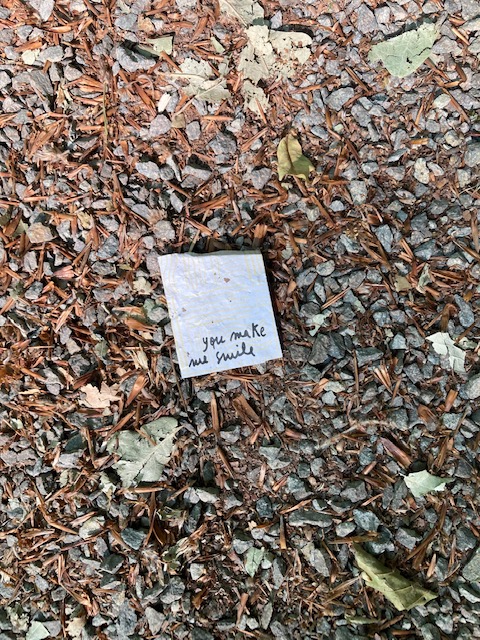