We are arrived at our hotel last night after waiting for a long while for the shuttle.

It will be here in 25-30 minutes, the woman at the shuttle desk told us. This estimation was closer to 50-60. When we did meet the shuttle driver, he checked everyone in, and we followed him in procession to the shuttle bus.

The drive was hilarious. I have begun to craft a theory that Boston is the way it is—crazy driving, loud, pushy people always in a hurry—because of all the Italian who immigrated there so long ago. And who wouldn’t be in a hurry to get to Rome, a city where one feels instantly a part of a beating heart. With each beat of this vibrant city, I feel a pulsation of life energy move through my entire being. There is divinity here, of this I am sure.

The shade is blocking my view, I said to my husband. A few minutes later when the driver raised the shade up, I realized that I might have been better off with it down. I cringed as tiny cars made insane moves between lanes, narrowly escaping utter destruction by milliseconds.

Holy hell, I inhaled after one particularly close call.

Focus on the pretty flowers growing along the side of the highway, my husband suggested.

Flowers bloomed in whites, pinks, and reds from wild green plants all along the highway and in the median. It was strange to see highway signs with Firenze and Napoli written on them; however, the song on the radio—Everybody wants to rule the world by Tears for Fears—was very appropriate, and we sang along as we approach the heart of an empire that once did just this.

Once in the city, I was surprised to see that the design and motion were reminiscent of cities I have driven through in Mexico and Costa Rica. The lines and direction markers, if they existed at all, were definitively faded from the pavement. My husband noted that everyone on a motorcycle was wearing a helmet, however.

I wonder if there is a law about wearing helmets? He mused as he pointed to a motorcycle waiting at the light at the cross street we passed. There were three people on the bike, one of who was a toddler with a pacifier, who was tucked between dad and the handlebars, his hands holding on confidently and focus straight ahead. This kid was right there in the present, being a Roman with all of this little might.

As with all European cities, and pretty much most cities I have visited around the world, motorcycles wound in and out of traffic. There were no actual lanes that I could derive, and cars and buses followed similar protocol to the motorcycles (hence, my earlier comparison to Boston, where similar chaos ensues at all times on all roads in and around the city).

Elizabeth Gilbert’s word for Rome may be sex. So far, ours has been humanity—loud, teeming, writhing humanity (the plane ride was just an introduction). The color? Red. When we were at the airport in Brussels, checking in for our flight, I saw a woman with a red sleeveless shirt with a serious ruffle coming down the center. She had on satin sandals with heels that tapered to a point and a red blazer.

She has got to be going to Rome, I thought to myself, and I was not at all surprised when she wound up sitting next to me on the plane.

Another word for Rome: fancy. When we walked out to the arrivals area of the airport, we were met with a crowd of people, waiting to meet whoever they were waiting to meet. The women were dressed to the nines, bedecked in slinky dresses, heels, and jewels.

We were thankful to be the first shuttle stop and checked into our hotel. There was an additional tax per day, along with an additional fee to add me to the room. Ah, the hidden cost of travel. Still, it was a relatively small price to pay given that we only had to fly a short two hours from Brussels to get here and not a transcontinental flight, followed by transatlantic flight, from Arizona. I will pay to avoid jet lag any day!

We dropped our bags in the room and exhaled with relief before heading out into the night in search of dinner.

Here is another word for Rome. Pizza. It was pizza we went in search of for dinner.

Let’s look for a place with people. If it is packed with locals, we will know it is a good sign that it is a good place to eat.

The first place we found that was packed with locals was unfortunately also hosting a crowd of about 50 more people waiting outside. No one seemed to be in a hurry to eat. People stood chatting and laughing, holding cups of beer and wine.

Not being Roman and also fast-approaching a meltdown from lack of food, I turned and marched in the direction of another pizzeria we had passed that also had people standing outside. We arrived and figured out that we needed to talk to a large, older man. He stood behind a cash register and held reign over the clipboard with the waiting list and generally seemed to be in charge of everything that went on at the restaurant. Every time a waiter left the kitchen with an armload of plates with beautiful food, they stopped by the old man so he could note all of the various dishes. It didn’t seem to be a particularly efficient method, but I imagine it was effective.

The pizza making, on the other hand, the staff had perfected down to a fine art. It was simple and beautiful to witness. Every few minutes, a shorter, rotund guy with black, horn-rimmed glasses would lay out several thin rounds of dough. He would then spread cheese, vegetables, and whatever other ingredients the clientele had requested. The pizzas were then put into a fiery oven interior, cooked, and returned to the counter. The waiters then took upwards of five pizzas each to the eager customers.

We watched this scene as we waited to be seated. At one point, a grandmother holding her chubby grandson stood beside us. Every time one of the younger waiters walked by, he could pinch the boy and say something in Italian, which would set the grandmother to laughing. It was like watching an authentic play unfold before us, incredibly endearing and altogether and beautifully Italian. 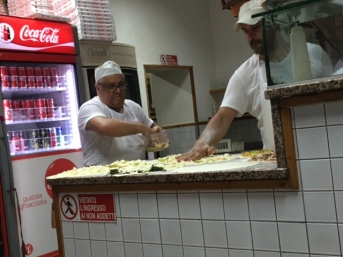 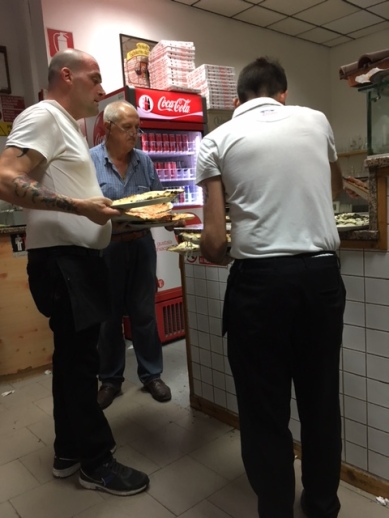 We waited a total of about 20 minutes and were then led to a table. Like the blogs about cheap but delicious places to eat in Rome, this restaurant was nothing fancy. There were sports jerseys on the walls and photographs of futbol players, but it was otherwise pretty simple. The food? Amazing!

Granted, we were pretty ravenous, but the bubbly white wine served cool with the pizza funghi porcini that literally melted onto my tongue when I took my first bite were beyond delicious. 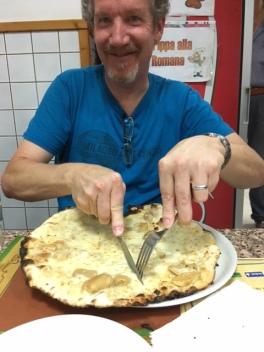 This is SO good! I told my husband.

Really, it doesn’t take that much to make me happy. Good food goes a long way toward keeping me content.

Once we had begun to eat, I took a lot at my phone to check the time.

It’s 10 o’clock! I exclaimed. As a rule, I am generally in bed at least by 8:30pm so I can read, meditate, and unwind before going to sleep.

At 10:30pm, a young couple walked by our table. The woman was holding a baby that had to have been born days before it was so tiny and brand new.

The kid was totally crashed out, and this restaurant was not a quiet place.

I guess if you want your baby to be able to sleep through anything, it makes sense to bring it to a restaurant late at night.

Yeah, they say that anything you want your dog to be able to do as an adult you need to introduce to it as a puppy. I imagine babies aren’t that much different.

So, now that I have shared this sage advice with you, if you have an infant or are planning on starting a family, keep it in mind that you might want to live in Rome (or somewhere with noisy restaurants) for at least the first year of baby’s life. Trust me, I am a terrible sleeper. I wake up to any sound and can never fall asleep when there is someone like the person above us our first night in Rome, who was either training for a marathon or had just adopted a baby elephant, which was being trained for a marathon.

Our bellies full, we walked back to the hotel and settled in. It took my husband going down to the front desk to complain, texting me to see if the marathon training was still happening to prove to the staff that the noise did indeed exist, before the staff person called the person above us to request a reprieve from their late night training regimen.

It was a fitful night, and we were woken up by a woman talking quite loudly on a phone next door at 7:07am. I could even hear the person on the other end of the call.

I think that cultures get louder the closer you get to the equator, my husband said later that morning.

I wonder why that is. Maybe, it has to do with the heat. Everyone gets all fired up.

Having grown up as part of an extended jewish family, I understand noise very well. In my family, if someone wants to say something, they just start talking over the person who currently holds the conversation spotlight. They gradually increase the decibel of their speech until they finally overpower the person speaking and get the stage all to themselves…for a little while, at least.

Maybe that is why they forced the Jews to leave the Mediterranean and move to Eastern Europe? They were just too loud.

Suffice it to say that Rome, while not a quiet place, is certainly not lacking in spirit and zest for life. I am doing my best to enjoy this ancient, festive city for the few days that I am here. 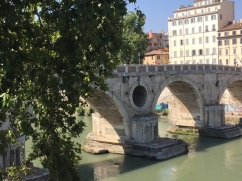